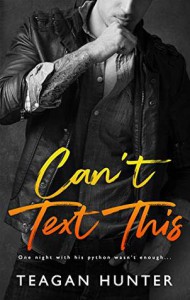 That's how I ended up in the bathroom of some dive bar with a stranger.

Me, Monty Andrews, the quintessential virgin girl next door.

I was so out of my element, but there was no denying our explosive attraction, even via text.

Commence Operation Bang Each Other Out of Our Systems, because that was all it was⁠—unfinished business.

I had no intention of falling back into the sheets with the tattooed, muscly, dirty-in-the-best-kind-of-way single dad over and over again...but I did.

Review: Loved Robbie's book . Robbie is Zach best friend. Robbie ends up making out with a girl named monty at the bar and she leaves him but leaves her number . Robbie can't stop thinking about her so Zach tells him to text her so he does and they text for awhile and they both want to have sex but monty has been making him wait . The agreement was to sleep together and then go their separate ways but once they had sex they couldn't and monty was a virgin and didn't tell Robbie at first . They end up fooling around a lot more and then make it official and then they find out something big . Monty is Robbie son teacher and there isn't any rule against it but the creep teacher catches Robbie and Monty together at a photo booth and saved the photo for blackmail and they broke up . Monty goes to her boss and explains the situation and the boss says he going to talk with creep teacher. Robbie and monty get back together and a year later they move in together so cute .


Is Uncle Zach a creeper?” The kid’s voice is full of excitement because he is in love with my best friend. In a weird turn of events, I met Zach the same night I got my ex-girlfriend pregnant.


I stare at my best friend, mouth hanging open in shock. “You’ve turned my own spawn against me? That’s messed up, man.”


Laughter bursts out of Zach and water covers the counter. “What in the hell are you teaching your child?” I shrug, grabbing a new towel and cleaning up the mess. “I don’t know where he gets that shit.” “Uh huh.”


Ah, ah, ah—a live-in girlfriend.” I briefly squeeze my eyes shut and try not to laugh at his enthusiasm. “Right. My bad.” “It’s because of my ass. That’s what sealed the deal, really.”


Hey!” she calls when I step out. “I heard you finger-banged some girl in the bathroom of a bar.” “I fucking hate your boyfriend.”

Ah, ah, ah—a live-in girlfriend.” I briefly squeeze my eyes shut and try not to laugh at his enthusiasm. “Right. My bad.” “It’s because of my ass. That’s what sealed the deal, really.”

Checking out my fridge too? Damn.” “I had to check for severed heads.” “I keep those in the basement.

Thank you for trusting me with your body, Monty. Thank you for choosing me, for allowing me to be the one who will always have that part of you

You love me so damn much that you went out and bought a bunny so I’d stop making unannounced visits to your place, right?” “First, who in their right mind is actually afraid of bunnies? Bunnies! The most innocent creatures ever.” “Hey, Marshy resents that remark!” I roll my eyes. “Second, you leave Thumbelina Bruce Wayne out of this. She’s done nothing wrong.”

“I know this was supposed to be light and fluffy and fun or whatever, but it’s evolved. I want more than that. I want stability. I want real. I want you.”


He’s named after your goat-loving bestie?” I chuckle at her description. “The one and only.” “That must really go to his head.” “You have no idea.”

Because I love you, you dumbass