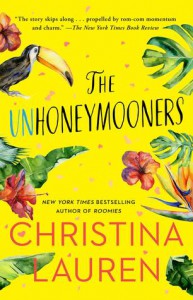 Olive is always unlucky: in her career, in love, in…well, everything. Her identical twin sister Ami, on the other hand, is probably the luckiest person in the world. Her meet-cute with her fiancé is something out of a romantic comedy (gag) and she’s managed to finance her entire wedding by winning a series of Internet contests (double gag). Worst of all, she’s forcing Olive to spend the day with her sworn enemy, Ethan, who just happens to be the best man.

Olive braces herself to get through 24 hours of wedding hell before she can return to her comfortable, unlucky life. But when the entire wedding party gets food poisoning from eating bad shellfish, the only people who aren’t affected are Olive and Ethan. And now there’s an all-expenses-paid honeymoon in Hawaii up for grabs.

Putting their mutual hatred aside for the sake of a free vacation, Olive and Ethan head for paradise, determined to avoid each other at all costs. But when Olive runs into her future boss, the little white lie she tells him is suddenly at risk to become a whole lot bigger. She and Ethan now have to pretend to be loving newlyweds, and her luck seems worse than ever. But the weird thing is that she doesn’t mind playing pretend. In fact, she feels kind of... lucky

Review : I really loved this book it was cute and funny and I loved the characters. This is about olive she's a twin and her sister is getting married and olive is happy for her but she's annoyed she has to deal with Ethan Dane's older brother. But the reception doesn't go to well when everyone but Ethan and olive get some kind of shellfish poisoning and Ethan and olive have to take their honeymoon. Ethan and olive don't get along she thinks it has to do with him judging her eating cheese curds . They have to pretend to be married on this honeymoon and then olive runs into her new boss and Ethan and olive have dinner with her new boss and his wife . Then they run into Ethan ex girlfriend and her fiance very awkward. Olive starts enjoying Ethans company and hes not what she thought he was . Ethan ends up drinking a lot and ends up kissing olive he tells her he likes her and apparently Dane told Ethan when they first met not to bother with olive . Ethan and olive hook up and then they end up start dating but the problem is ethan let it be clear he never planned those trips Dane did and he was cheating on ami . When they get back home olive tells her boss the truth and he let's her go and then Dane hits on her and Ethan doesn't believe her and either does ami when olive tells her and then Ethan breaks up with her . Ami finds texts on Dane phone . Ami invites all the girls Dane has been cheating on her and Ethan shows up and Ethan is trying to get her back and he shows up at the restaurant she's working at and they get back together. Two years later they are back at Maui with her sister and her new boyfriend and Ethan plans on proposing. And he does kinda and it was so sweet so them .
Quotes:“I can appreciate my body in a bikini and still want to set fire to the patriarchy.”

Rumor has it your dad brought her flowers and she pulled off every petal and used them to spell PUTA in the snow.”

Ethan Thomas is doing something weird to my emotions.”

knew he was a book lover, but to be the same kind of book lover I am? It makes my insides melt.”