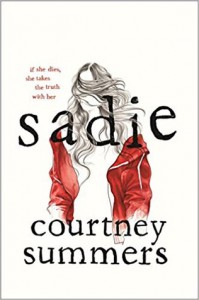 A missing girl on a journey of revenge and a Serial-like podcast following the clues she's left behind.

Sadie hasn't had an easy life. Growing up on her own, she's been raising her sister Mattie in an isolated small town, trying her best to provide a normal life and keep their heads above water.

But when Mattie is found dead, Sadie's entire world crumbles. After a somewhat botched police investigation, Sadie is determined to bring her sister's killer to justice and hits the road following a few meager clues to find him.

When West McCray—a radio personality working on a segment about small, forgotten towns in America—overhears Sadie's story at a local gas station, he becomes obsessed with finding the missing girl. He starts his own podcast as he tracks Sadie's journey, trying to figure out what happened, hoping to find her before it's too late.

Courtney Summers has written the breakout book of her career. Sadie is propulsive and harrowing and will keep you riveted until the last page.


Trigger warning pedophilia sexual assault
Review:
This book was a really interesting read I highly recommend the audiobook it was really highly produced .
So this book is told in two POV a podcast called the girls and Sadie's point of view. Sadie's younger sister maddie has been murdered and sadie knows who it was and wants to kill him . West the guy doing the podcast is trying to find out about sadie . Sadie finds out information about Keith who is really jack from a woman who dated him and left him cause of his interest. Sadie finds Marley brother silas but first she found his kids and a guy named Javi who she let herself for awhile like but then she stalks silas and finds some unsettling things and tells javi to call the police on him and he does get arrested thankfully. West is still finding out information about sadie and interviewing people she was using her middle name with people she was meeting . Sadie gets a motel room and finds this is a place Keith/jack stayed she has to get into that room so she does and she finds trofies from other girls hes abused with that she finds him and there was an altercation and I think we can guess what happened. West finds the last woman he was with Amanda and her daughter who was abused also jack is dead from an untreated stab wound probably from sadie . The ending yes it's not satisfying but I think its realistic cause sometimes girls dont get found but I think we can guess jack killed sadie and he killed madie the DNA matched that so at least that was solved .

Quotes :
And it begins, as so many stories do, with a dead girl

But love is complicated, it’s messy. It can inspire selflessness, selfishness, our greatest accomplishments and our hardest mistakes. It brings us together and it can just as easily drive us apart.

I wish this was a love story. A love story about lovers whose mouths meet like two puzzle pieces fitting perfectly into place, about the electric feeling of one person’s name on the other’s tongue because no one has ever spoken them out loud like that before. About people who spend the night together looking at the stars until entire constellations exist within them. Everyone is perfect in that indistinct way most characters are and every perfectly constructed scene in their fictional lives is somehow more real than anything you’ve known or lived. Love stories, romances, leave a person secure in the knowledge they’ll end Happily Ever After and who wouldn’t want a story like that? I wish this was a love story because I know how it goes in one like mine, where the only moments of reprieve are the spaces between its lines. But here’s the thing I tell myself to dull the sharp edges of everything that’s surely left to come: The worst has already happened.

And Sadie, if you’re out there, please let me know. Because I can’t take another dead girl.”