Book review :Harry potter and the order of the Phoenix j.k Rowling 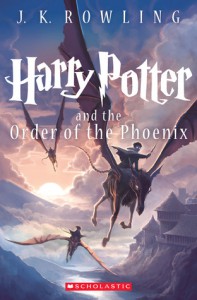 There is a door at the end of a silent corridor. And it’s haunting Harry Potter’s dreams. Why else would he be waking in the middle of the night, screaming in terror?

Here are just a few things on Harry’s mind:
• A Defense Against the Dark Arts teacher with a personality like poisoned honey
• A venomous, disgruntled house-elf
• Ron as keeper of the Gryffindor Quidditch team
• The looming terror of the end-of-term Ordinary Wizarding Level exams

…and of course, the growing threat of He-Who-Must-Not-Be-Named. In the richest installment yet of J. K. Rowling’s seven-part story, Harry Potter is faced with the unreliability of the very government of the magical world and the impotence of the authorities at Hogwarts.

Despite this (or perhaps because of it), he finds depth and strength in his friends, beyond what even he knew; boundless loyalty; and unbearable sacrifice.

Though thick runs the plot (as well as the spine), readers will race through these pages and leave Hogwarts, like Harry, wishing only for the next train back.

Review : this one was intense I really enjoyed this one so harry is fighting this dementor because he is trying to keep his cousin safe but then he gets a letter saying hes expelled but Dumbledore fixed it and he has to go to trial so moody and lupin and tonks pick harry up to go to the safe house at sirus house . And there is the order of the Phoenix which they are preparing for Voldemort . Ron and hermione become prefects . Harry has been receiving some backlash thinking he is a liar saying Voldemort is back not many believe him except luna , nevil , and his friends . Luna is one of my favorite characters shes unique and weird . There new teacher umbridge is a fucked up professor who hurts kids she is fucking nuts . Harry gets this vision of sirus but it was really a trap to steal harry's prophecy and sirus dies I was sobbing. I loved this book I will be sad when I finish the series .


Quote :We won't be seeing you,' Fred told Professor Umbridge, swinging his leg over his broomstick.

'Yeah, don't bother to keep in touch,' said George, mounting his own.

Fred looked around at the assembled students, and at the silent, watchful crowd. 'If anyone fancies buying a Portable Swamp, as demonstrated upstairs, come to number ninety-three, Diagon Alley — Weasleys' Wizard Wheezes,' he said in a loud voice, 'Our new premises!'

'Special discounts to Hogwarts students who swear they're going to use our products to get rid of this old bat,' added George, pointing at Professor Umbridge.

'STOP THEM!' shrieked Umbridge, but it was too late. As the Inquisitorial Squad closed in, Fred and George kicked off from the floor, shooting fifteen feet into the air, the iron peg swinging dangerously below. Fred looked across the hall at the poltergeist bobbing on his level above the crowd.

'Give her hell from us, Peeves.'

And Peeves, who Harry had never seen take an order from a student before, swept his belled hat from his head and sprang to a salute as Fred and George wheeled about to tumultuous applause from the students below and sped out of the open front doors into the glorious sunset.”