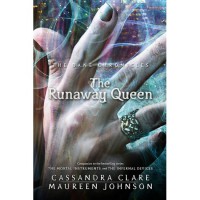 Magnus Bane has a royal role in the French Revolution—if the angry mobs don’t spoil his spells. One of ten adventures in The Bane Chronicles.

While in France, immortal warlock Magnus Bane finds himself attempting to rescue the royal family from the horrors of the French Revolution—after being roped into this mess by a most attractive count. Naturally, the daring escape calls for invisible air balloons…

Review : This one was an interesting story a bit slow but I enjoyed it . Magnus is hired by a guy named Axel to protect the queen until some vampires want her so Mangnus gets her onto a balloon and somehow Magnus gets a pet monkey .

“Hello," Magnus said to the monkey. The monkey did not reply. "I shall call you Ragnor.”


I'll need you to get a leash for my monkey, Claude, and also a hat."
"Of course, monsieur"
"Do you think he needs a little coat as well?"
"Perhaps not in this weather, monsieur."
"You are right," Magnus said with a sight. "Make it a simple dressing gown, just like mine."
"Which one, monsieur?"
"The one in rose and silver."
"Excellent choice, monsieur.”

“There was no way possible [the queen] could have done all of the things the pamphleteers claimed. The crimes were too gross, too immoral and far too physically challenging. Magnus himself had never attempted half of them.

If one could look this fabulous, one had an obligation to.