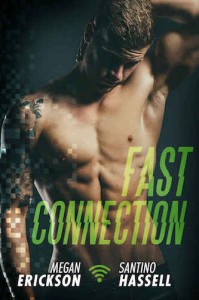 
After a decade of serving in the Army, everyone still expects me to be Dominic 'Nicky' Costigan--the skirt-chasing player. They don't know I've been spending my days trying to figure out my post-military life. Including how to pick up guys.

When I meet Luke on a hookup app, he makes it clear it's for one-night only. That's fine with me, because I'm down to see what this silver fox can do. But after I arrive at his doorstep, it doesn't take long to realize we have serious chemistry, and we end up meeting again.

He's got more walls around his heart than a military base, but I think he's as addicted to me as I am to him. He can't resist me for long. I mean, who can? Except Luke's rules exist for a reason, and when I test his limits, things get complicated. Maybe too complicated.

Review : Dominic has left the military and is discovery is Bisexuality he goes on Grinder and meets Luke they have sex and then mostly Luke kicks him out but Luke is in need of more of Dominic and they hook up again Luke has two Kids and his son is friends with Dominic sister which Luke finds out and then ghosts Dominic until Dominic goes over to his house and talks to Luke so they start a friends with Benifits thing until Dominic has a date with someone and Luke isn't happy they have sex and Luke tells him he wants to date him. Dominic's family is having money problems and Dominic offers his money to his family but his father only takes it if he owns half of the shop . Dominic wants to be an Emt and Luke tells him to go for it his family finds out he's Bi on thanksgiving because some douche was spreading rumors . when Micha and Adrianna go missing to a convection Luke and Dominic get in a big fight and they barely speak after they find them . Luke gets in a fistfight with Dominic's dad and Luke and Dominic break up on Christmas Dominic's family paid for EMT classes . Luke goes to Dominic's dad and offers to help with the landscaping for the shop and when Dominic finds out they talk make up and have sex . The ending was cute there was a big party for Dominics birthday I loved this book so cute and sexy .
Quotes:
Garrett: Who would want you to serve them food? Dominic: Shut the fuck up. I didn’t text you for examples of your stunning sarcasm and subzero personality. Garrett: Right. You asked me how to use Grindr. While you’re apparently handling food. Dominic: Your point being…? Garrett: Just tell me exactly what you want. Dominic: School me on Grindr, fool. Worth the app subscription? Garrett: You’re hesitant to spend $3.99 a month. Dominic: You suck at being my gay friend, my man Garrett: … Dominic: ;) Garrett: It’s worth the download. I assume you’re not out yet, so use a picture of your abs on the profile. Give face pics after messaging someone if you’re serious about meeting them. You look like Chris Evans, so they’ll respond with thirst. Don’t meet a murderer.

If dude showed up wearing a mask and carrying a hammer, I was out. A serial killer didn’t answer the door. Well, I didn’t think so. Luke was even hotter in person. Strong jaw, good cheekbones, and eyes so pale blue they reminded me of icicles.


It had been cool the first two times, but now I was about ready to shoot Hamilton myself.


Blue eyes met mine and went wide. Nicky was Adriana’s brother. Nicky was Dominic. Dominic Costigan. I’d been fucking the older brother of my son’s girlfriend.


“Let me explain this first. If I just wanted to fuck, I’d get back on Grindr and find some twink who likes to bend over. I like having sex with you, but I also like making you sandwiches and reading whatever dumb shit you message me every day. So shut up and let me get you clothes.

Micah sat across from me, tapping away at his phone and ignoring my existence. I’d bet my house he was talking to Adriana. “Are you and Adriana sexually active?

Micah jolted in his chair and dropped his phone into his half-eaten bowl of popcorn. “Dad!” “What?” “You can’t just… blurt out questions like that. You have to lead up to it.” “Says who?” “Says, like, everyone.”


I was falling in love with Luke Rawlings, and I hoped to do everything I could to make him fall with me

She thinks it’s fucking hilarious. She also said you have a nice ass. Dominic: Damn right i do

Luke: I have a thing to tell you. Dominic: if you break up with me, i’ll shank you Luke: Micah asked me about you. Dominic: what about me? Luke: If we’re banging. Dominic: wut Luke: His exact words were “dating”.

“No, Dominic. Thank you.” He kissed me again before dropping another against my forehead. “For not giving up on me, and for making my life so fucking full.