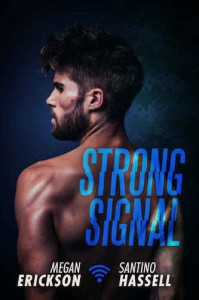 I was counting down the months until the end of my deployment. My days were spent working on military vehicles, and I spent my nights playing video games that would distract me until I could leave Staff Sergeant Garrett Reid behind.

That was when I met him: Kai Bannon, a fellow gamer with a famous stream channel.

I never expected to become fixated on someone who'd initially been a rival. And I'd never expected someone who oozed charm to notice me—a guy known for his brutal honesty and scowl. I hadn't planned for our online friendship to turn into something that kept me up at night—hours of chatting evolving into filthy webcam sessions.

But it did. And now I can't stop thinking about him. In my mind, our real life meeting is perfect. We kiss, we fall into bed, and it's love at first sight.

Except, like most things in my life, it doesn't go as planned.

Review : Garret is a solider on his last months until deployment when he's playing a video game and gets killed he looks up the guy and he's a twitch streamer his name is Kai . I love Kai he's adorable Kai has social anxiety and rarely leaves his apartment him and Garrett start talking and flirting. Garrett finds out Kai was a cam boy and they start kinda sexting and skype sex it and was sexy as fuck so Garrett goes to see Kai and it doesn't go as well Kai shuts the door he panics then he Kai text when he's on the other side of the door Garrett ends up falling asleep and Kai wakes him up and ends up kissing him and then end up having sex they have a lot of fun and Kai tells Garett about his social anxiety . Garrett comes out to his family and they want to meet Kai but Garrett explains to them about his anxiety so when Garrett and him were video chatting he meets Garrett's sister and mom it was so cute . Garrett is taking a job out of state and he wants Kai to come with him and when Garrett is gone looking at a house to rent Kai went to a doctor and he goes to Garretts mom's house and says he's coming with Garrett yes I'm so happy for them I love this series it's so cute and sexy .
Quotes:
He was a slim, pale skinned, onyx-haired youth with expressive blue eyes and a very pretty mouth. Almost too gorgeous to be real.


Holy shit. I’d just had my face owned by a hot little twink.


There was no question that he was gorgeous. The inky black hair spilling around his face, bright eyes, wide mouth and that adorable upturned nose. And his body was just as amazing. On the thin side but really fit. Sometimes when he stood up in front of the camera, his pants slid down a little and I got an eyeful of hipbones and the barest hint of pubic hair.


Oh hey, I spend my life online playing video games, I never leave my apartment. I also used to jack off on camera for money, and those videos are everywhere online. Nice to meet you.


He was probably off risking his life every day and I was hitting on him. I should be arrested. Or prevented from speaking to people.

I received a new message from G. Holy shit. There was a picture attached. One. And I nearly spilled my oatmeal all over my lap, because Jesus fucking Christ on a cracker, the guy was smoking hot. The picture was clearly a candid shot. He sat sprawled on a cot, wearing nothing but camo pants—the light beige ones—boots and dog tags. My mouth went dry, and I set my bowl down before I dropped it, leaning forward to get a better look. He had aviator sunglasses on so I couldn’t see his eyes, but he had thick, messy brown hair shot through with sun-bleached gold. And muscles. Like, lots of muscles. I whimpered. If this was

Sir, what’s your emergency? Oh, nothing, just about passed out watching my online Army boyfriend beat off. Sir, please don’t use this line for non-emergencies. Have you seen my Army boyfriend? You’d have a heart attack too. Sir, I’m hanging up now.

Let’s see how flexible you are.” “I’m really fucking flexible,