Book review : It ends with us colleen hoover 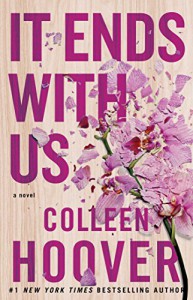 Sometimes it is the one who loves you who hurts you the most.

Lily hasn’t always had it easy, but that’s never stopped her from working hard for the life she wants. She’s come a long way from the small town in Maine where she grew up—she graduated from college, moved to Boston, and started her own business. So when she feels a spark with a gorgeous neurosurgeon named Ryle Kincaid, everything in Lily’s life suddenly seems almost too good to be true.

Ryle is assertive, stubborn, maybe even a little arrogant. He’s also sensitive, brilliant, and has a total soft spot for Lily. And the way he looks in scrubs certainly doesn’t hurt. Lily can’t get him out of her head. But Ryle’s complete aversion to relationships is disturbing. Even as Lily finds herself becoming the exception to his “no dating” rule, she can’t help but wonder what made him that way in the first place.

As questions about her new relationship overwhelm her, so do thoughts of Atlas Corrigan—her first love and a link to the past she left behind. He was her kindred spirit, her protector. When Atlas suddenly reappears, everything Lily has built with Ryle is threatened.

Review : This book was sad and beautiful . Lily has been through a lot and then she meets Ryle a doctor he tells her he doesn't do relationships but he wants her so they finally start going out but then in a heat of a moment he hurts her . Lily owns a flower shop and her coworker is Ryle's sister . She tells him if he hurts her again she will leave him . Lily's friend from childhood is back Atlas . When Lily was younger Atlas was a homeless kid Lilly use to smuggle food and they use to watch the ellen show and then there relationship became more until he moved and went to the military but now he's back he owns a restaurant . Ryle is threatened by there past relationship and speaks harshly to Atlas saying Lilly pitty fucked him . Lily's father was abusive to her mom . Lily is happy with Ryle , Ryle meets Lily's mom . Alysa is is pregnant. I wasn't sure I was going to like this book because I don't really like abuse books but it was told very well . Lily meets Ryle's parents and they like her and Lily and Ryle get married Alysa has her baby rylee a baby girl and then Lily goes home and Ryle has been drinking and he hurts her again twice one he pushes her and there was an incident Ryle accidentally shot his older brother and he died . Ryle tells lily he wants help that he needs to walk away sometimes but then something bad happened he hurts her again he bites her beats his head against her and tried to Rape her I FUCKING HATE THIS MAN and she calls Atlas and she goes to the hospital and she stays with Atlas for a few days and she meets his friends Ryle is going to England for three months and Lily finds out she's pregnant a lot to take in and she doesn't know what to do about Ryle she finally tells Alysa she tells Lilly to leave him . Ryle is back and Lily tells him off . And she tells her mom . Lily goes into labor and she tells Ryle she wants a divorce . Months later when she's bringing emmy to see Ryle she runs into Atlas she drops of Emmy and runs after him and I hope they end up happy together they talk about kids and charity .
Quotes:
There is no such thing as bad people. We’re all just people who sometimes do bad things.”

He pulls back to look down at me and when he sees my tears, he brings his hands up to my cheeks. “In the future... if by some miracle you ever find yourself in the position to fall in love again... fall in love with me.”

It stops here. With me and you. It ends with us.”

You can stop swimming now, Lily. We finally reached the shore.”


“Maybe love isn't something that comes full circle. It just ebbs and flows, in and out, just like the people in our lives. Just because we didn't end up on the same wave, doesn't mean we aren't apart of the same ocean.”


“Did I mention he was wearing a onesie? I’m talking a legit, full-grown man in a SpongeBob onesie.”

Yes. I kept the magnet Atlas gave me when we were kids. Yes. I kept the journals. No, I didn’t tell you about my tattoo. Yes, I probably should have. And yes, I still love him. And I’ll love him until I die, because he was a huge part of my life. And yes, I’m sure that hurts you. But none of that gave you the right to do what you did to me. Even if you would have walked into my bedroom and caught us in bed together, you still would not have the right to lay a hand on me, you goddamn son of a bitch!
audiobook romance Contemporary stand-alone favorites 5-stars books-i-own book-boyfriends books-that-made-me-cry 2016 releases need to read books i ve read in 2017