Book review : The assassin and the desert 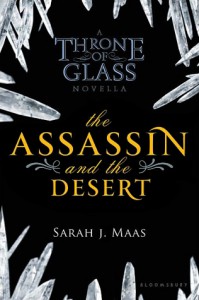 The Silent Assassins of the Red Desert aren’t much for conversation, and Celaena Sardothien wouldn’t have it any other way. She’s not there to chatter, she’s there to hone her craft as the world’s most feared killer for hire. When the quiet is shattered by forces who want to destroy the Silent Assassins, Celaena must find a way to stop them, or she’ll be lucky to leave the desert alive

Review- This novella wasn't my favorite but I still enjoyed the story Celaena must go to the silent master to train with him and get the letter of approval . When she gets there she meets a girl who is going to be her roommate for a month Ansel I felt something was off about her she has a very dark past but her and Celaena start to become friends .When her and Ansel have to go on a trip they end up steeling horses . The master finally agrees to train her , Celena has been thinking of Sam and how Aroben beat her . At this dance thing that they were having she dances with the masters son and when he was about to kiss her she couldn't do it cause of sam I ship them so bad to bad I know what happens stupid spoilers :( but in the end Ansel turns out to be evil and drugs Celena and she figures it out she ended up killing Mickal and the masters son was inured it comes to a fight to the death and she doesn't kill Ansel she lets her go . The master gives her the letter and some gold to pay off Aroben I hate that guy so much it was a great story onto the next one .
Quotes-
Words could be just as deadly as steel.”

If you can learn to endure pain, you can survive anything. Some people learn to embrace it—to love it. Some endure it through drowning it in sorrow, or by making themselves forget. Others turn it into anger. But Ansel let her pain become hate, and let it consume her until she became something else entirely—a person I don’t think she ever wished to be”


As the memory of that day echoed through her, she remembered the words Sam kept screaming at Arobynn, as the King of the Assassins beat her, the words that she'd somehow forgotten in the fog of pain: I'll kill you! Sam had said it like he meant it. He'd bellowed it, again and again and again...”