Which category will you be in?

Reblogged from Lora's Rants and Reviews : JUST BE WITH HIM YOU LOVE HIM

Her mom is a freaking bitch

He reenenlisted without telling her what the fuck

Be with him damn it dont settle

Book Review : the legend of the golden raven k. Ancrum 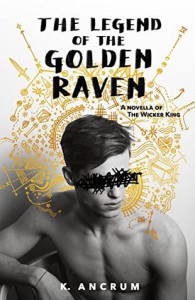 April 2-3
K. Ancrum's The Legend of the Golden Raven novella, part fairy tale and part gritty reality, follows a boy as he descends into madness.

August and Jack weren’t meant to be friends. One is a misfit with a pyro streak and the other a golden boy on the rugby team. But as their relationship intensifies, Jack slowly begins to lose his mind—taking readers on an intimate journey into the fantasy kingdom creeping into the edges of his world.

As the novella moves back and forth between a medieval legend and our own, contemporary world, nothing is as it seems. The boys alienate everyone around them as they struggle with their sanity and as Jack’s quest to fulfill a dark prophecy begins to consume them both . . .

Devour this companion novella to The Wicker King.


Review : this novella was very interesting it was from Jack's POV and we got to see what he saw and how he loves August and his fantasy world I enjoyed reading it .

Quotes :
You’re the love of my life, you know,” he said bravely. Jack once saved August's life . . . now can August save him?

August is a misfit with a pyro streak and Jack is a golden boy on the varsity rugby team--but their intense friendship goes way back. Jack begins to see increasingly vivid hallucinations that take the form of an elaborate fantasy kingdom creeping into the edges of the real world. With their parents' unreliable behavior, August decides to help Jack the way he always has--on his own. He accepts the visions as reality, even when Jack leads them on a quest to fulfill a dark prophecy.

August and Jack alienate everyone around them as they struggle with their sanity, free falling into the surreal fantasy world that feels made for them. In the end, each one must choose his own truth.

Written in vivid micro-fiction with a stream-of-consciousness feel and multimedia elements, K. Ancrum's The Wicker King touches on themes of mental health and explores a codependent relationship fraught with tension, madness and love.


Review : this book was freaking crazy and I loved it I didn't think I would but I did the relationship between the boys is definitely very toxic I will say . This book is very interesting cause if you read the physical book the pages start out light and then go to black very cool. This book is about Jack and August . Jack sees a world August cant and August will always fallow Jack . Jack is seeing a fantasy world where he is the wicker king and they need to get jack to stop seeing visions and August knows he should take jack somewhere to get help but then they burn down a old toy factory and get sent to a mental hospital Jack had a tumor and he finally stopped seeing visions Jack and August kissed .
Quotes

I never said I didn’t feel the same,” Jack said harshly. “Just because I don’t see the kingdom doesn’t mean it doesn’t still exist,” Jack said furiously. “As long as one of us remembers it, it still counts. We decide the end of the game, not them. Not anyone else. You’re so stupid, August. You’re so stupid and I love you so much.”
Jack kissed him so carefully that August thought he would fall to pieces. Kissed him with the weight of knowing the price of risk. Then he gazed back at August like his heart was already breaking.

It was the same face that Jack had made on the roof, in the middle of the night, when they rolled in the grass, when he sat back with August’s blood and ink on his hands, when his face was lit orange with flames, when he’d opened the door to Rina’s room, when he stared across the gym at the homecoming dance, when he pulled him from the river and breathed him back to life.

Jack had been waiting. He’d been trying. He was scared. There were tears in his eyes and it took August’s breath away.”

Favorite  a heart in a body in the world In this sharp-witted romantic comedy about the clash of the classes (of all kinds), a poor girl at a rich kids' school ends up working at the school's toniest club-and gets mistaken for a boy!
In this high anticipated title, a kind of cross between HANA-KIMI and BOYS OVER FLOWERS, Haruhi is a scholarship student at an exclusive private school: Ouran High School, where it turns out the bespectacled, short-haired Haruhi is the only student from a lower-middle class family in attendance!

Then, to make matters worse, one day she breaks an $80,000 vase that belongs to one of the campus clubs-a mysterious outfit called the "Host Club," consisting of six superrich (and gorgeous) guys. Haruhi can't afford to pay back the cost of the vase, of course, so she's forced to work for the Host Club! And it's there that she discovers just how rich all the boys are and how different the rich are from you and me...And meanwhile, the eccentric but good-hearted rich boys are shocked to find out how life is on the other side...


Review :
This volume was cute the school festival is going on and the host club has received some threatening notes and its club against club football club against host club the main guy has has a childhood rivalry with kyoya since they were six . The host club ends up winning and Haruhi finds out the notes were from two people the fiancee of the rival guy and tamaki father who likes playing tricks on him and this guy is definitely tamaki father hes very like him we meet the grandmother who is very unkind to tamaki and we learn some backstory so tamaki happened cause of an affair and his mom is french and sick and the grandmother made a deal with money she is to never speak to tamaki again and tamaki is to go to Japan its very sad . In the part of this volume we meet the vice principal who talks to the host club about not wasting food and they all end up making soup it was cute .

This friendship is toxic

Simon , you're blushing, observed Jace. And you're a vampire and almost never blush, so this better be really juicy . And weird. Were bicycles involved in some kinky way ? Vacuum cleaners ? Umbrellas?
Big umbrellas , or the little kind you get with drinks ? Alec asked . The Bone Witch by Rin Chupeco

Progress: 27/418pages
The Friend Zone: the most hilarious and heartbreaking romantic comedy of 2019 by Abby Jimenez